Why I'm a Google Fan (but it's okay that you're not)

I wrote a post about running Android on a netbook. I'm actually writing this on the netbook, using the Blogger app. It's fast, with the keyboard it's pretty easy, and with Android the netbook is running smoothly. Doing this stuff is not for the faint of heart. There are a lot of cool things you can do with Google's tools, and I've found that with a bit of research, you can take things to a higher level. Send emails from your spreadsheets, send and receive from multiple email accounts all through one gmail, create and apply custom themes in Slides, and lots more (check out the resources section of my site for more). 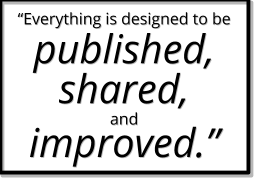 The even better part is that pretty much everything is designed to be published and shared easily. That appeals to me , because having one of my ideas grow and evolve beyond what I envisioned is a huge compliment. Because it's all designed for sharing and building, the work that other people have put into it (and published on sites like steegle.com) can help me, too. Give a little, get a lot.

But it's not always easy.

It has taken me months to get comfortable enough with Sites so that I can get it to do things the way I'd like, and I still can't do things like edit the header HTML, so Twitter cards won't work for anything except my blog. I'd love to be able to set a time-limit for forms, and restrict each of my students to submit only one time, but that's not yet possible. I want a lot of live-updating features that are the hallmark of docs, sheets and slides to transfer to other products like Scripts or Sites. It's not perfect, but it's constantly improving.
Keeping up with those improvements and changes can be a challenge. As soon as you get used to one tool or procedure, another one comes along that might be better. If you don't enjoy trying out new things (when it comes to technology, I really do enjoy it) then it can be daunting. Especially when we find out about something new and exciting, but don't have the chance to experiment with it yet (I'm talking to you, Google Classroom).

So if you're not as excited as I am about something new, don't feel bad. If your eyes glaze over when someone says just write a little bit of code, that's fine. If your blood pressure skyrockets as soon as something goes wrong with technology, relax. You don't need to be a hardcore geek, and if you're happy with your iStuff, that's cool with me. But please don't try to explain to me why it's better, because I have different preferences. I actually want to be able to break stuff. Because with every opportunity to break something comes the opportunity to make it better. Embracing this take a sense of adventure, a childish naïveté about the good inherent in the world. If you're a technology optimist, you'll see openness as the possibility for improvement, and not as a potential pitfall.

I like having the option to make mistakes trying to do something new and creative. I'd like to be able to mess up (and mess up royally) as I try to change how my students learn, in ways that a company's research and development team didn't have to anticipate and build into the product. I don't mind looking like a fool when I'm trying to change the world, because when it comes right down to it, we all make mistakes. I'll make my mistakes as I work towards innovation in education.

Where will you make yours?

Yes, you read that right. Android, on a netbook.


To be more specific, Android 4.4 on my old, beat up, hand-me-down, "here, take this because it doesn't work any more," Acer Aspire One ZG5 netbook. From 2008. Take a look at the specs if you want, but rest assured, it's old, slow, but has a lot more storage than a typical phone or tablet.

There are ports of Android versions from 2 all the way up to 4.4 available from the Android x86 site. I've tried 2.4, 4.0.4 and now 4.4, which is currently running well on my netbook. The really nice thing about this (and most versions of anything Linux-based, including Chromium) is that you can run this directly off a USB key without installing it to the hard drive. This is useful for test-driving it before you take the plunge and fully install it.

There have been a few quirks I've run into.

One is that the screen sometimes rotates on its own, or when told to by an app, and you need to use a key command to get it to go back to regular orientation. Control-F9 (or F10 or F11 or F12) are the commands to tell the screen what orientation to use.

Another issue is that live wallpapers don't seem to work. I get a long period of a static image (no, not static like an old TV, static as in not dynamic), followed by a sudden image change. Not a problem, but something to be aware of.

The power button is used to lock and unlock the screen. Depending on the model of netbook, it may also support powering off the device. However, on mine, I needed to do the following to shut it down:

The last issue was a bit more tricky to troubleshoot. I was unable to get the installation to work on either ex2 or ex3 partitions. I used an NTFS file system, and everything seemed to work properly. There is a limit on the size of the partition that you can create of 2GB, which is pretty small. I believe there is a way to expand this, but I still need to investigate and experiment further. EDIT: Since the first writing of this post, I have solved the problem. I used a USB with GParted installed (created using the LinuxLive USB creator tool) to reformat the entire hard drive as ext3. I then reinstalled Android, and used the Android installer to format as ex3. The installation worked, and now it shows 110GB of free space (by far the most free space I have on any of my Android devices).

For the past few weeks, I've been procrastinating remarkably effectively. I have a habit of putting aside time-sensitive work and focusing instead on some side-project. I find it an incredible way to avoid doing work that needs to be done, yet at the same time not feeling guilty for wasting lots of time. I suspect this is an explanation of why I have my own set of motion-controlled lights that are connected to my stereo...

One of the side-projects that grabbed hold of my attention like a bulldog with a hamhock was the idea of getting Twitter cards set up with my website. For those of you who don't know, I'm very active on Twitter (I help moderate the #cdnedchat weekly chats, and I interact with educators from around the world).

The bad news is that, as of the time of writing, there is no way to edit the HTML header information in a Google site. And before I get blasted with comments saying that you can have a custom header no problem, please be aware: the header image and the header HTML are two separate and distinct parts of a website. Header image, no prob. Header code, no dice. Seems like Google wants to avoid me getting in there and breaking my website.
However, there isn't the same restriction on a Blogger blog. And it just so happens that I use Blogger. Hooray! I found a very helpful post on how to integrate Twitter cards to your Blogger. And this is actually better than I had hoped: each blog post will get its own custom Twitter card, generated from images and search descriptions you include when you write them.

I did, however, modify the code just a little bit. I wanted to make sure that the Twitter cards would work for all my posts, not just new ones where I've taken the time to enter a search description and proper images. A couple of